As part of our commitment to the Nucleus Project and #LivingRRI, SAIAB was one of a number of local organisations to host a dynamic presentation by Hayley McClellan, an erstwhile animal behavior scientist from the Two Oceans Aquarium. McClellan has since shifted her attention from marine mammals to how humans behave in relation to the environment, especially with regard to single-use plastic and the devastating effects that #plasticpollution has on marine animals.

As part of a newfound inspiration to promote conservation awareness, Hayley has been leading the the Two Oceans Aquarium’s national campaign #RethinkTheBag for a plastic shopping bag free South Africa. During her week-long tour of Makhanda (Grahamstown), she gave an engaging and fascinating talk at SAIAB as part of this campaign, urging and sensitising everyone to do right by the planet, and demand a plastic shopping bag free world. 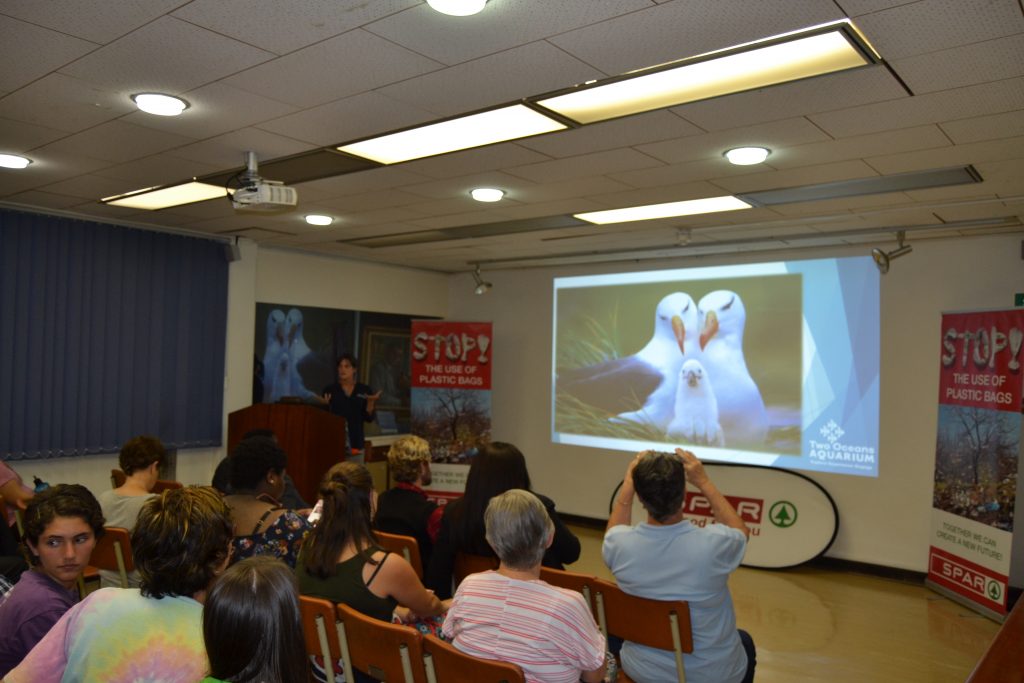 The #RethinkTheBag campaign is a great example of a scientist working across and with all societal ‘cells’. The talk at SAIAB attracted representatives from many sectors including businesses like the local Spar-Oak-Cottage grocery store which has considered alternative packaging, the university, civil society, schools and the media. After McClellan’s talk, the audience had the chance to engage with her by asking questions and sharing their sentiments about rethinking plastic use. Following McClellan’s talk, the BBC nature documentary Blue Planet II Episode 7 was screened. This episode which focuses on plastics in the ocean, highlighted environmental challenges facing our oceans and other ecosystems due to human pollutants. The event resulted not only in positive attendance, but positive coverage through local media.

The week-long tour was organised by the Makana Plastic Action Group (MPAG) who aim to reduce the use of single-use plastic in Grahamstown/ Makhanda and the greater Makana municipal area. Hayley’s travel was sponsored by Spar SA.