Disruptiveness is considered a negative quality in many contexts, but Maria Acaso is revolutionising learning by injecting it into her classrooms. Cassi Camilleri writes.

‘I was a terrible teacher,’ Maria Acaso says, recalling the early days of her academic career. Today, she is one of Spain and Latin America’s leading figures in the field of educational revolution. Having just been awarded a research grant, she embarked on her teaching journey, following in the footsteps of those before her. ‘I was doing what I saw others do,’ she says. ‘Which is funny because as a student we always complained about teachers and how boring they were.’ Then, while on her travels in 2011, taking in wonderful places like Stanford, Harvard and the Ghetty museum, Maria discovered the book that catalysed everything.

Alejandro Piscitelli’s The Facebook project and post university introduced the idea that how (methodology) you teach is more important than what (content). When she returned to teaching, Maria embraced this thinking and set up a research project around her classes called This is not a classroom. ‘This project changed my life,’ she says. During its nine month run, Maria introduced art think as pedagogy in her classrooms. She weaved in divergent thinking and collaborative work, making pleasure as the most important product of the class. Since then, she has never looked back.

Maria sees her teaching as ‘cultural production.’ ‘My classes are my art,’ she says, ‘I make them with the tools artists use. I utilise social media. I name my classes and sign them as artists sign their work.’ 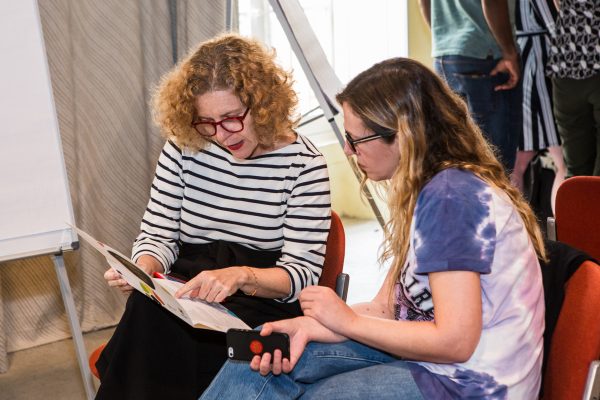 All of this impacts the students’ own perception of the class. In fact, parallel to the classes, Maria was also running qualitative research with focus groups, recording the process. A year after the project ended, when all the information was analysed, they had an important takeaway on their hands. ‘Half of the students, 30 out of 60, described their thinking as completely transformed,’ Maria says. This marked a very special shift for her too. ‘My classes, my signatures, they were no longer an academic thing, they became an action paradigm. As a teacher, I am not someone who is making a simulation for certification, I can really change the world because my work, my teaching can be a tool for transforming society.’

This notion of transformation is a very powerful one and Maria knows change is not easy. ‘As a teacher, you have to see yourself as a political agent not an academic agent,’ she says. ‘We live in a fear based society. We live in a world where we are being told that we are fat, we have bad teeth, we have this, we need that. […] This is in personal life but also in our professional sphere. We fear change, and structures are built to prevent us from changing.’

But Maria calls for educators to be brave, even if repercussions may come. ‘We need to be strong. We need to be honest with ourselves. But when you are this way [like me], you have problems. I have had students who go to the university to complain about me and tell my superiors that I am not doing my job. But because I believe in it, because I am honest with myself, because I am consistent, I will keep at it.’

Asked about what advice she has for educators and knowledge seekers, Maria highlights the importance of the body and biography in the classroom. ‘The body in academia is killed. Academia tells us we are a brain and not the body. But without the body, there is no brain. This is something we have to recover in our classes. In my class, we need to move around and do things. We need to recover the body and think about the body in a different way.’ The same can be said for biography, she says. ‘There is a lot of knowledge that is not recognized by academia. And biography is one of them. What was your day like yesterday? Maybe you broke up with your girlfriend and that is important to bring into the class today. It is important this to create a community. It is important to create a relationship.’

The mindset Maria wants to communicate is that academic knowledge is found everywhere and educational institutions must accept this. ‘Universities try to protect this idea that they have the knowledge and that we must go to them. It’s all about papers and conferences, and all these kinds of things. But universities have forgotten about the real world. We need to bring down those walls for universities to keep up with the advances society has made. Art can bridge that gap.’