The Wellcome Genome Campus in Cambridgeshire might be the NUCLEUS project’s newest partner, but teams at the campus have been quick to embed #LivingRRI into a major multi-stakeholder event.

Held from 1 – 2 July, the genomes and biodata hackathon (#BioDataHack) was the first of its type to be held on the campus, bringing together researchers, technicians, software developers and bioinformaticians to develop new  usable solutions to healthcare challenges. Topics being ‘hacked’ were put forward by 5 major  companies including AstraZeneca and Microsoft, and included:-

Importantly for #livingRRI and our NUCLEUS journey, the event had a strong entrepreneurial element and brought together not just academia and industry, but also people who could provide patients’ perspectives. This latter ambition was championed through the MOBILE NUCLEUS support of the event. Through NUCLEUS funding we were able to provide bursaries for five attendees who would bring user-oriented perspectives. Among the attendees NUCLEUS funded were parents of a child living with a genetic condition and representatives from a local charity supporting people with rare genetic diseases.

perspective in the design of healthcare solutions and interventions

User perspectives were given particular prominence with a plenary talk in the scene-setting session and the close out ceremony, where one of the winning teams talked about how their solution was inspired by the patient input. In addition, representatives from the campus working on the NUCLEUS project helped mentor the teams throughout the two days of the event.

Dr Kenneth Skeldon, Head of Public Engagement and NUCLEUS project lead at the Wellcome Genome Campus said “The MOBILE NUCLEUS work plan introduced an important dimension to the BioHackathon – namely the involvement of potential beneficiaries of the coding challenges being hacked. They include patients, carers and other healthcare workers who all have a different type of expertise than the software coders to bring, but equally relevant.” 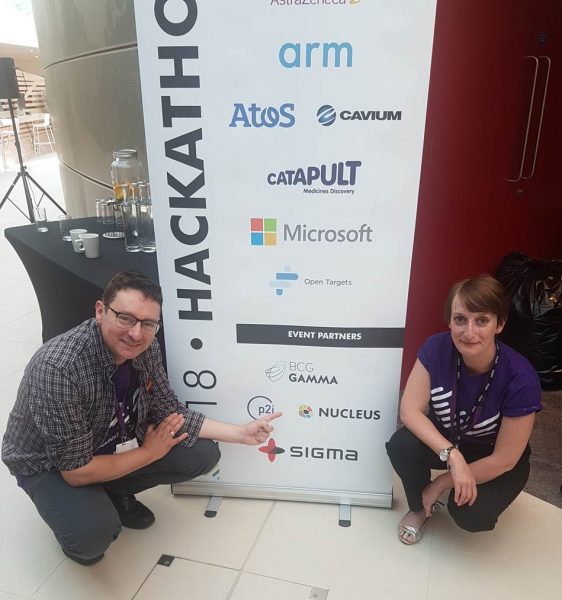 Kenneth Skeldon and Sarion Bowers of the Wellcome Genome Campus

champion sharing of knowledge at the recent campus BioHackathon

Dr Sarion Bowers, Policy Lead for the Wellcome Sanger Institute, from where many of the hacking contributors came added “Having the views of multiple stakeholders in creating new interventions and solutions is key to success. If new tech and design is too top-down, solutions won’t work in the real world. Influencing the design of the event deliberately  echoed the interplay between stakeholder cells in the NUCLEUS approach.”

A fuller write up of the event can be found at:-